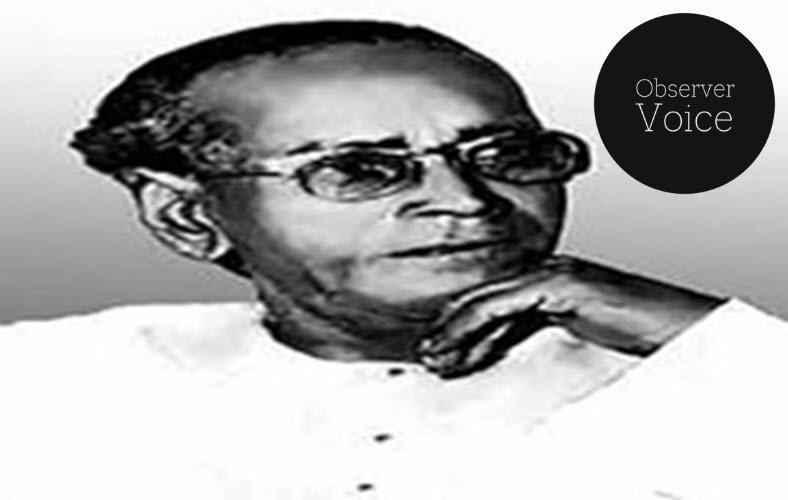 Tarasankar Bandyopadhyay was born on 23 July 1898, in West Bengal, India. In 1916 he passed his Matriculation exam from Labhpur Jadablal High School and went to St. Xavier’s College, Calcutta and then South Suburban College (now Asutosh College). He joined the non-cooperation movement while he was in intermediate at St. Xavier’s College. Because of ill health and political activism, he couldn’t finish his university course.  He was also associated with a radical militant youth group during these college years, and he was arrested and interned.

As a member of the Indian independence movement, he was arrested in 1930, but was later released. After that, he went into literature. Rabindranath Tagore met him for the first time in 1932 at Santiniketan. The same year he published his first novel Chaitali Ghurni.

He moved to Calcutta in 1940. He moved to Baranagar in 1941. He was the president of the Anti-Fascist Writers and Artists Association in Bengal in 1942. During 1944, he presided over the Kanpur Bengali Literature Conference organized by non-resident Bengalis. Prabasi Banga Sahitya Sammelan was inaugurated in 1947 and the Silver Jubilee Sammelan in Bombay was presided over by him. He also got the Sarat Memorial Medal at Calcutta University.

Among his works were Ganadevata, Jaalsaghar, Abhijan, Raj Kamal, Bicharak, Kavir, etc. ‘Ganna Begum’ is a historical novel worth mentioning for its traditional values. In 1967, Tarashankar Bandopadhyay won the Jnanpith Award for his novel ‘Ganadevata,‘ about a schoolmaster fighting tyrannies in his village. “Jalsaghar” examines the natural decay of feudalism and the values surrounding a Zamindari family who have fallen on hard times, immortalized by Satyajit Ray. Abhijan, a story about a cab driver in a hypocritical society, would be his masterpiece. In ‘Bicharak‘, a judge struggles to reach a decision about a murder case, and in ‘Kavi,‘ a gypsy poet wanders around with prostitutes and dancers. He also led the Indian delegation to the Asian Writers’ Conference in Tashkent in 1957. He was elected president of Bangiya Sahitya Parishad in 1970. From 1952-60, he was a member of the West Bengal Vidhan Parishad and from 1960-66, he was a member of the Rajya Sabha.

In 1955, he won the Rabindra Puraskar for his novel Arogya Niketan, and in 1956 he won the Sahitya Akademi Award. He won the Jnanpith Award for Ganadebata in 1966. He was awarded the Padma Shri in 1962 and the Padma Bhushan in 1969.