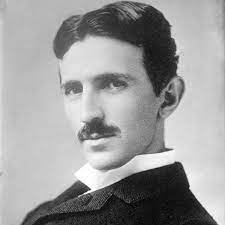 He was born on 10 July 1856, in Smiljan, Austrian Empire (modern-day Croatia). During his early education, he studied German, arithmetic, and religion at a primary school in Smiljan.

With his extraordinary intelligence, he completed the four-year course within three years in 1873 at the ‘Higher Real Gymnasium’ in Karlovac.

In 1875, he went to the ‘Austrian Polytechnic’ in Graz, Austria, on a military frontier scholarship. His first year was awesome, but in his second year he got addicted to gambling, which ruined his studies and he couldn’t finish his degree.

He worked as a draftsman at the ‘Central Telegraph Office’ in Budapest in 1881. After that, he became the chief electrician at the Budapest Telephone Exchange and made major improvements to the Central Station.

In 1882, Tesla moved to Paris to work for the Continental Edison Company. In 1883, he built his first induction motor while on assignment in Strassburg. Tesla arrived in New York in 1884 with four cents in his pocket, some poems, and calculations for a flying machine. First, he worked for Thomas Edison, but they were very different in background and methods, and eventually, they separated.

Alfred S. Brown and Charles F. Peck, Western Union superintendent, and attorney, were fascinated by Tesla’s work, so they helped him start ‘The Tesla Electric Company’ in 1887. As a result, Tesla developed an alternating current induction motor. Eventually, he got his work patented.

After visiting an exposition in Paris in 1889, Tesla came to know about the existence of electromagnetic radiation which was proved by Heinrich Hertz. Soon, he set up his own lab and ran a lot of experiments, including the Tesla Coil and carbon button lamp. In addition, he experimented with electrical resonance and different types of lighting.

From 1892 to 1894, he was vice president of the American Institute of Electrical Engineers.

At the Columbia Exposition in 1893, Tesla showed off a fully developed polyphase AC system. It was done through Westinghouse Electric, which had his patents.

He moved to Colorado Springs in 1899 and set up a wireless global energy transmission lab. Trying to provide free wireless electricity everywhere, he experimented with artificial lightning.

In 1900, he started building the trans-Atlantic wireless telecommunications station in Wardenclyffe, near Shoreham, Long Island.

Eventually, he came up with a way to transmit mechanical energy with minimal loss over any distance and determine underground mineral deposits with precision.

One of his major contributions is the modern alternating current electricity system. Edison’s direct current (DC) system was less efficient and less effective.

His most famous invention is the Tesla Coil, which creates powerful electrical fields capable of producing spectacular electrical arcs by converting energy into high-voltage charges.

His contributions to radio’s development earned him the nickname “father of radio” in 1943.

He worked on radars, X-rays, and rotating magnetic fields, which are the basis of most AC machines today.

Tesla (unit), an SI-derived unit of magnetic flux density (or magnetic inductivity), is named after him.

He was given the Order of the White Eagle in 1936 by the Yugoslav government.

On his 75th birthday, he was featured on the cover of Time magazine.