World Drowning Prevention Day is observed each year on 25 July. It is aimed at raising awareness about death because of drowning. It serves as an opportunity to highlight the tragic and profound impact of drowning on families and communities and offer life-saving solutions to prevent it.

The new UN General Assembly resolution invited WHO to coordinate actions on drowning prevention within the UN system. In this capacity, WHO leads preparations for World Drowning Prevention Day by hosting a global launch event, producing related advocacy materials and supporting national and local activities in countries and communities around the world.

Here are quick facts about Drowning as a danger

Drowning is the process of experiencing respiratory impairment from submersion or immersion in liquid. Not all drownings are fatal. Here are a few steps: 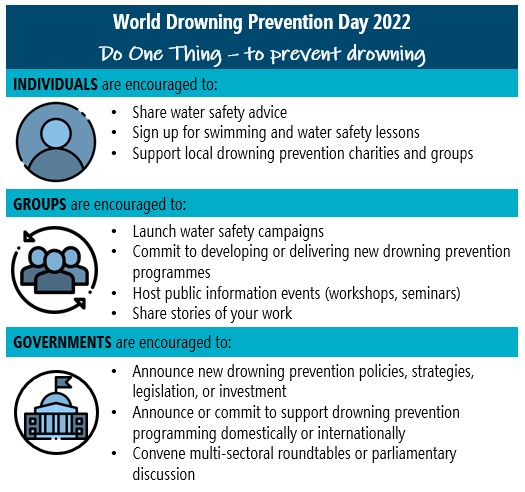 Last year the UN General Assembly adopted a Resolution on Global Drowning prevention in which 25 July was designated to be the -yearly- World Drowning Prevention Day (WDPD) and the World Health Organisation (WHO) was invited to coordinate actions and facilitate the observance of this day.

Read Also: Children’s Day in India and its Significance